There’s Gold in Them Thar Hills! (article in Atlanta Magazine)

Almost two centuries after a gold rush brought fortune hunters (and bar brothels) to North Georgia, a new generation of prospectors is rediscovering what’s been true for 500 million years

They come from all walks of life; they represent all age groups. They travel from across the southeast and across the country, and they share one common passion. They search for gold.

They are recreational prospectors, members of The Weekend Gold Miners, a 500-strong locally-based organization. On Memorial Day Weekend 60-70 members gathered at the club’s 136-acre location on the Etowah River for a common dig. The common is held once or twice a year—a second one will take place in July—and is an event during which members share equipment, share the work, and in the end, share the gold that is found.

“We try to at least send every child here home with a piece of gold,” said John Coleman of Cartersville, club chairman of the board. Coleman has spent many weekends in Lumpkin County during the seven years he has been mining.

While members travel to the common dig for the thrill of finding gold, there is more to it than that. “The gold is in the friendships,” said Ed Vasek of Forest Park, whose wife Selina serves as club president. Others agree. The camaraderie that develops from working side by side, sharing meals and sitting around a campfire at night is a treasure of its own, said common dig chair, Mike Pratte.

The prospectors use three main pieces of equipment for their mining. Highbankers are gasoline powered machines that sit up high on the bank of a large hole in the ground. The hole is not in a creek or river but close enough that, when dug, it fills with water. The water is pumped from the hole into a trough and dirt that was removed from the hole is shoveled into the trough; then the soil washes out of the machine into a three piece sluice box designed to wash out the dirt and trap the heavier gold. The soil and water return to the hole they came from.

A troummel is similar but includes a steel drum which rotates to break up the clay. Water is pumped in, dirt is added to the drum and the rotation of the drum breaks down the dirt. Rocks larger than 1/2 inch are sent to a trough, and the rest exits through the sluice box like the one on the highbanker.

The third piece of equipment is a dredger which reaches to the bottom of the river and pulls soil out of the river bed. “Some people do not understand that this process is a benefit to the river,” said Pratte, who emphasizes that the club places a high priority on environmental awareness. “When we dredge a river, we pull trash out of it, and we also stir up the bottom, making new spawning beds for fish,” said Pratte. The prospectors strictly abide by state and county laws, as well as restrictions placed on them by owners of the property they lease, he adds.

The Weekend Gold Miners’ Etowah River site looks a lot like a rustic miner’s camp. The club has built roads on the property, and members are responsible for clearing and maintaining their campsites. Many club members leave their campers there permanently and camp on weekends while they do their prospecting.

Families come together at the mining locations to work, play, and just relax. Edie Robertson of Suwanee, whose husband John edits the club newsletter, loves to spend her weekends in the woods. There is that hook, she says—the first piece of gold found—that brings people back. But there are other reasons for participation, Robertson says, including the serenity and relaxation, and, she adds, sometimes just the great night’s sleep in the outdoors.

Children of all ages participate in the mining. Those who are old enough work along side their parents, and the younger ones have fun playing in the outdoors—especially in the dirt piles.

While some women can be seen running equipment and prospecting, others who accompany their husbands on their weekend outings prefer to participate in the activities of the ladies auxiliary. These women prepare and serve meals in a large tarped picnic area that functions as the hub of the camp. The auxiliary also participates in many other activities, from helping staff the club’s demonstration booth at Dahlonega’s Bear on the Square festival and helping with Gold Rush Days at the Auraria Clubhouse, to providing assistance at Christmastime to a family in need.

The gold mining club leases three tracts of land in the Lumpkin-White county area, all of which are rich in gold, gemstones and artifacts. In addition to the Etowah location, they lease property on the Yahoola and Tesnatee rivers. Since the early 1800s the Etowah area has been mined by the Cherokee, Spanish conquistadors, Chinese coolies, prospectors from Dahlonega’s gold rush days and by our local mining industry, said Pratte.

“We are always looking for additional gold rich land,” he adds. A member of the club’s board, Pratte says the club generally pays the owners enough in lease to cover the property taxes, and the club is flexible regarding its use of the land and will comply with owner’s specifications.

The non-profit organization can be found on the web at www.weekendgoldminers.com. 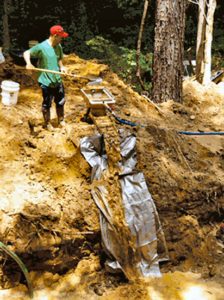 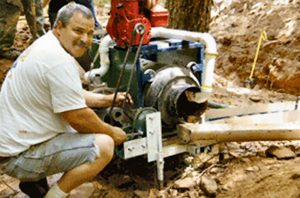 The first gold of the Memorial Day Weekend dig (pictured in pan at top) was found on Saturday morning by 13-year-old Matt Pratte, who has been prospecting with his brother and his dad for many years. Top photo above, Jamie Bedgood of Ballground operates a highbanker. Bedgood took up mining six months ago after seeing a show on TV about gold mining. His Internet search turned up the Dahlonega-based organization. Bedgood was looking for an outdoor activity his family could participate in—he has a three-year-old daughter. Just above, Mike Pratte, chair of the common dig and member of the board, makes some final adjustments to a troummel he has built that is being used for the first time. While some of the equipment used by club members is manufactured for prospecting and purchased locally from Crisson’s Gold Mine, much of it is homemade. “All the equipment is fairly simple and runs on the same basic principles,” said Pratte. Pratte moved his family to this area five years ago when they decided they would rather live near their weekend hobby than travel back and forth on a regular basis from their home in Phenix City, Ala. 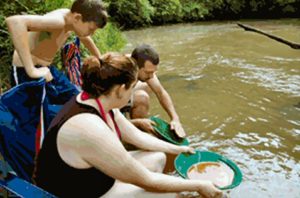 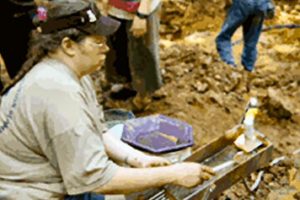 Above left, Kenny Hughes and son Christopher of Dublin give Allison Williams of Warner Robins a lesson in panning. New to prospecting, the three came to the common dig with Hughes’s dad who has been a “serious” prospector for about a year. At left, Dawn Harvey of Scottsboro, Ala. operates a mini highbanker. The mini takes a concentration of already processed dirt and runs it through a smaller machine. All five of Harvey’s children were on site as was her husband. The family has been prospecting for seven years. How much gold have they found? Enough to keep them coming back, said Harvey. 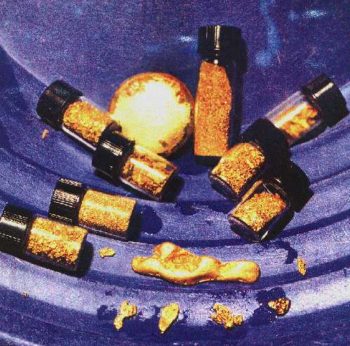